It snowed Sunday. Where we live that's unusual enough to cause us to stand outside and watch it. My kids built a snowman with the neighbors and threw snowballs until their fingers were frozen. The meteorologists told us to expect 12" (30cm) of snow. These predictions seldom live up to expectations, but we prepare for the worst and hope for the best. We have plenty of supplies, but I made sure my generator was working, bought some extra fuel, and filled a few jerrycans of fresh water.

As it turned out, we got about half the snow we expected and we have clear skies today. I was out the next morning, clearing sidewalks and one of my neighbors was driving around with his snow blade on the front of his tractor, clearing the streets. I like to think that part of what made the storm so benign was the fact that our community was prepared for it. If we weren't so prepared, it probably would've been much worse.

Be prepared. That's what the Boy Scouts say. So I'm going to tell you to do something and you should do it. Right now. Before it slips your mind. Because if you do this and bad things happen, you won't regret it.

I want you to back up the keystore you use to sign your Android apps.

If you publish apps, whether it be to Android Market, another app store, or just distributing them on your own website, you have a certificate and that certificate is held in a keystore. If this file is lost, you lose the ability to update your apps on the Android Market. If you submit an app update signed with a new certificate, your users will have to reinstall your app signed with the new certificate. It's quite simple to avoid this: all you need to do is back up the keystore containing your certificates and you're safe.

If you use the MOTODEV Studio export workflow, the keystore is in a file named motodev.keystore. You can usually find the file at these locations, although they may be slightly different depending on how your machine is configured.

If you use the Android tools or Eclipse plus ADT plugins, your keystore is wherever you told the tool to create it. But, a good place to start would be in the .android directory or in your Android SDK folder. There's no specific name for the keystore if you use keytool or the ADT workflow. You don't need to worry about .android/debug.keystore, which is used to sign apps for debugging. If this file is lost, the tools will recreate it.

Once you've located your keystore file, copy it somewhere safe--preferably in another physical location from your computer. Whether it's a flash drive, a network hard drive, your Dropbox account, or a github repo, it doesn't matter. So long as it is safe from being lost.

It would also be a good idea to store the password for the keystore. For this item, I'm not giving any specific advice other than it shouldn't go in the same place as the keystore itself. Your keystore password should be difficult enough that it can't be reversed by brute force and used, in case someone manages to get a copy of your keystore file. Every person's situation is unique, but you need to have a strategy for storing and recovering the keystore password other than "I'll remember it".

If you've started using a new keystore with the MOTODEV Studio workflow and you want to use a certificate from an existing MOTODEV keystore, it's easy to import the contents of one keystore into another. Go to the view named "Application Signing Tool" and click on the button whose icon represents "Import Keystore" (it's the second to the last button on the right side).

Now you need to find the existing file that you saved somewhere. You will need to remember the password for the import operation and choose "JCEKS" (Java Cryptography Extension Key Store) for the store type. Then press the "Load" button. If you have the password correct, the contents of the keystore will appear in the list below. You can choose the ones you wish to have in your existing keystore, which will be protected by the existing keystore password. 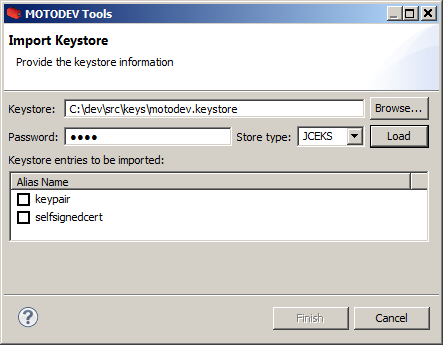 Today my kids are back in school. Later, I'll retrieve the scarf, hat and goggles when the snowman melts. I'm happy that our grass have some moisture and the kids had fun. I'm also relieved that my preparations weren't necessary. Besides, the gas in the generator will power my mower this summer. So, I'm good.

Are you good? Have you followed my advice yet? Good. Now, let it snow...